Now that Tailwind pushes bytes to your HTML instead of your CSS, we should be mindful of reducing class usage in our HTML. A good example is:

And this is in a list of only 6 items, imagine the difference when we're a dealing with repetitive lists and HTML on the order of dozens or hundreds.

I ran a little test to confirm this. Volkan Kaya made a good point that compression may make this a trivial difference. But in fact, it wasn't.

You can see the HTML used for both the duplicated Tailwind classes and the leaner HTML here.

Here are the comparisons between of an HTML file with ~65k list items of duplicated Tailwind classes, and a leaner version where the styles were moved to more efficient selectors. 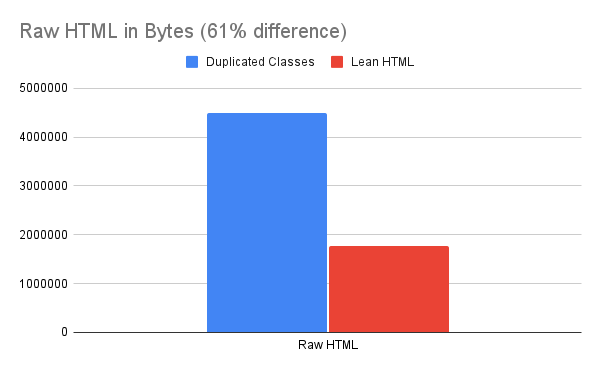 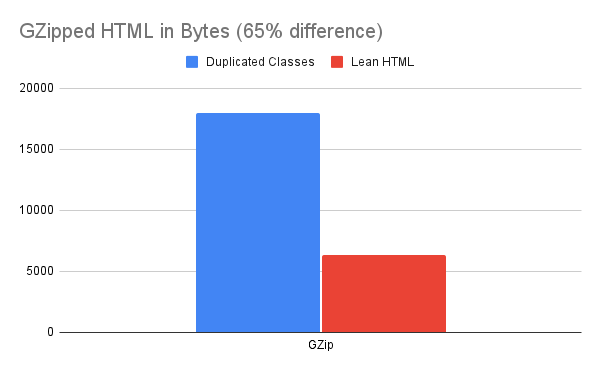 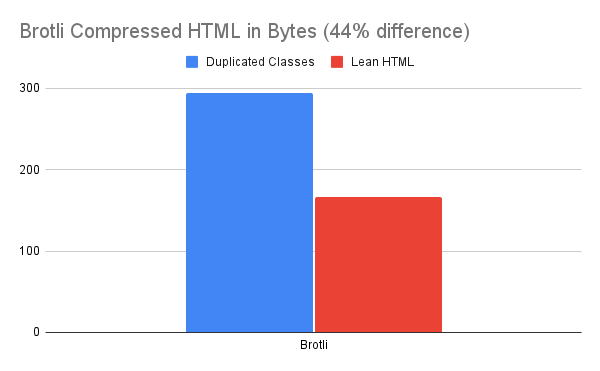 As you can see, there is a significant difference in size even with text compression being used. It's important to note, this is a contrived test and amplified to highlight a worst case scenario, so I don't imagine many will run into real-world scenarios that come close to these number differences.

I also compared the render and paint times. I figured this would be the number to suffer between the examples compared to compressed HTML. But it turns out that the paint and rendering times don't vary to any significant degree between either examples. They averaged somewhere between 800 – 1100 ms for the render, and 2-10 ms for the paint time.

Don't Forget the Power of the Cascade

This was a good rule of thumb 10 years ago when crafting CSS directly by hand, but it's worth repeating today even with tools like Tailwind at your disposal. Start your styles as generically as possible on your outermost elements, and get more specific only once you must address the particularities of inner elements.

I find abstraction is a great skill you get used to as a programmer over time. Look at all of the things that are in common, then group them together as one entity so they can be used more effectively. This works in programs as much as it does when dealing with CSS. If 90% of the text on your website is #334155, then the base text color on your html or body element (<body class="text-black">) probably shouldn't be black. This sounds obvious when I say it like that, but I'm continually surprised at how many websites I inspect that don't do this and instead insist on just repeating the class text-slate-700 on 289 elements of a 5 page website.

Many of you may be familiar with the concept of a reset or normalize stylesheet. That's what CSS abstraction looks like in practice and is at the far end of the "abstraction" scale. Since browsers don't have a unified way of styling default elements, we start things off with normalizing styles to get a consistent display for all elements. Then if we continue along the cascade, we may address our base element styles, where we get a bit more opinionated and style the look and feel of all of the naked elements that will be used, like <h1> headings and <input>'s. From here we usually move to component levels but the same holds true. We implement methodologies like BEM for our components so we can name and easily abstract things only at their block levels, carefully modifying them as needed. This makes things reusable and composable without the need to get too specific, too early.

I must admit, I hear a lot in recent years that cascading styles and CSS are a pain to work with, but I never really felt that myself. Maybe it's because I had a better experience with it when the web was a bit simpler and it was actually an elegant and powerful tool for creating a consistent visual interface across an enourmous variety of web pages with very few bytes. That's if you embraced its cascading nature and didn't work your way upstream like a desperate salmon going home to lay eggs and die of exhaustion. Styles cascade in one direction for a reason.